It all started in 1963. I was born, and -sorry if I disappoint you, against the image artists may have- I had a pretty nice childhood.

During primary school time I had my first performing experience - I mean performing for an audience ;-) I went for it, fully dedicated. And I loved it.
Maybe that's why I was one of the few who were asked for a second production. Or maybe it had something to do with my pants ... ;-)

In 1983 I started as a pupil at the Amsterdam Street performing School. There I learned to juggle, to ride a unicycle and the secret of comedy (being funny). I suffered for a long, serious and really, really bad period in my life to be fast, funny and really, really good ...

After some years I was capable (or at least brave) enough to take the big step: performing The Art, by trying, failing and trying again. Since then there have been many years of performing everywhere, from shopping streets in Oslo to five-star hotels in Italy.
(see resume)

While developing and polishing the actual show more and more in practice, I learned how to adapt to and interact with different circumstances, situations and audiences. Every audience has its own character, with difficulty and charm; I love the focus and dedication of a demanding theater audience as well as the honesty of a sceptical street crowd. I discovered this being in touch with the surroundings is a tremendous strength of the true, experienced street performer and it's still one of the things I enjoy the most in performing, especially 'on the street'. It is one of the reasons why the impact of my performances has impressed quite a few spectators as well as event organizers. 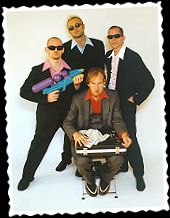 Since then I've had alternating periods of performing solo and in several teams. The last team production was The Spice Boys. Don't ask me why we called ourselves thus ... ;-)
During the summer of 1995 I started to work together with two friends and respected, very professional colleagues. Initially only occasionally and just 'for fun', but the show developed in no time into a very high impact performance. One year later the team was enriched with a fourth member, a dynamic tumbling acrobat from Australia, which generated a new dimension to the show. We worked together full-time for several years, and we still perform occasionally.
It has been a great experience to combine the individual circus skills, comedy and characters of four successful entertainers; a case of 4 x 1 = 10 ! Every time we performed I enjoyed being part of the team which created that great impact. The power of a team always impressed me, and still does; it is something a solo performer could never achieve on his own.
But times changes, and we decided to move on. Now we are all individually involved in seperate projects. 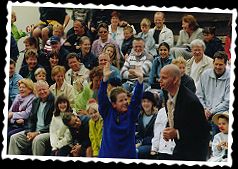 Since 2000 I have mostly been doing my solo show again. I think everything I did has made me stronger, more flexible and I believe even ;-) more enjoyable. My audience feels good.

And that's what life is all about ... no? Feeling good.